On Sunday 6 July, in Berlin's newest Buchhandlung Walter Koenig, Hans Ulrich Obrist sat down with 9 guests in an extension of a seriesof Interview Marathons. Marathons have taken place so far in Kassel (in conjunction with Documenta 12) and in London. In the fall, Berlin's Hebbel am Ufer theater (HAU) is scheduled to host another. 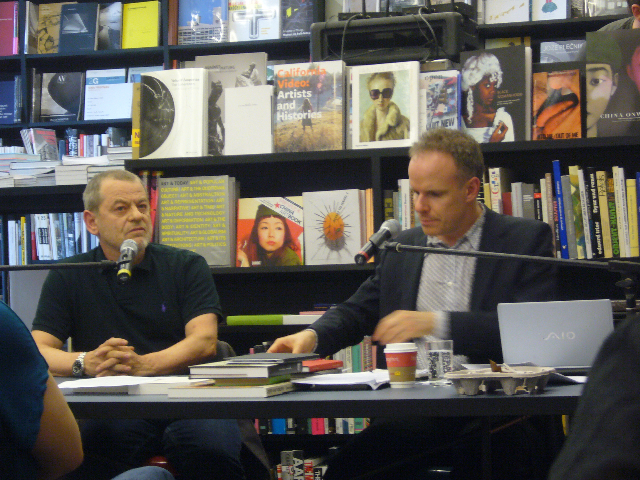 In a way, I dig this sort of thing – chatting with people in the pause, subtly responding to the performative microcosm of speakers, listeners, space. Listening raptly as the interviewees shift from thoughtful and sober, to sharply critical and energetic, to challenging and iconoclastic and sometimes all in the space of one interview. Collectively despising Thomas Demand for arrogantly occupying a neighbor's spot, as she went to get us stools to sit on, even as she said “hold my spot for me, I'll get us something to sit on.” And I said to him “you know, she's coming right back.” He came in rather late, and stood behind us in a cozy little niche, and as soon as she told me she would look for something to sit on he was edging forward. Back she came, and remove himself from her (at least 18 inches shorter than him) spot, he did not. Ignore us like I-don't-recognize-YOUR-face scum, he did. He stood there, he stood for the solid, immovable body of the patriarchy – or at least the mega-successful dude in the cobalt blue button-down, top 3 buttons open...

Back to the topic. The one thing in this sort of event that is always conspicuous when absent and often glaringly annoying when present – is audience participation. As we sat raptly listening under the towering shelves of books to the (largely) older and (presumably) wiser, the strict one-way-ness of this communication to the audience and the strange insularity of the dynamic between Obrist and the individual interviewed became something of a strain for me. Perhaps the questions he chose to pose systematically to each of his guests – or his early tactic of starting new interviews with the last question of the preceding interview – these could have served to create a sort of meta-conversation winding its way through the marathon. But as the pauses grew longer and more frequent, the chain-linked questions fell off, and I was increasingly irritated by the recurring questions. (Examples: “What is missing in Berlin?” “What are your unrealized projects?” “What is your relationship to the archive?”) I found myself thinking, it would be so much more comfortable and intimate if he would just be spontaneous and concentrate on the person, rather than continuously reasserting his pre-scribed marathon metanarrative. 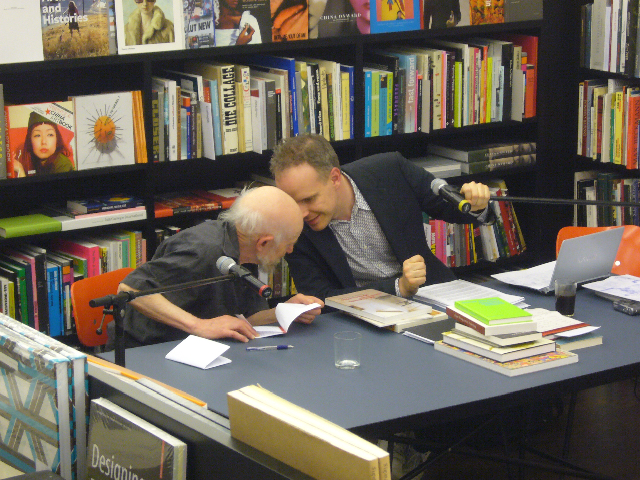 Despite all that, it was also a special relief not to have that one over-achiever in the room, who is committed to turning this discussion (or presentation) involving very fascinating person(s) into a platform for his or her own master's thesis.

But the question plagued – how can this event extend beyond the confines of this day and this bookstore and this crowd? Sure, I can publish some account of it, and I might not be alone in doing so. But it would remain just that, an account – a dead document somehow. 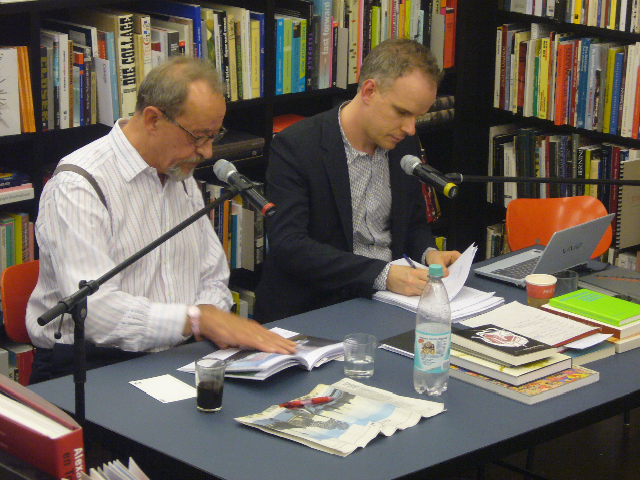 It occurred to me, over the course of my note-taking, that the rhetorical question, when used well, is a defining moment for a person speaking on the fly. It is often not just a challenge to the listener, but also to the speaker. Within this question is the seed of the problem to be addressed. Some rhetorical questions cannot be answered, and it in is this deep void of possibility after the question mark where meaning lies. Some can be answered, and if it is the speaker who does, he or she is in that moment passing on some important information. But what happens when this rhetorical question is taken out of its heavily charged context and reposed as a question in itself, to an audience unaware of the goals and motivations of the speaker?

I thought it would be interesting, or at least amusing, to derive a secondary interview based on the rhetorical questions asked while answering questions posed by the primary interviewer, Hans Ulrich Obrist, and pose them openly – to you. Read them, muse upon them, send your responses or tangentially related thoughts in – and we'll see if we can't keep the conversation going. Don't feel like you have to answer all of them, just whatever moves you. If you're perplexed or simply curious – perhaps you feel you can't answer a question as simply as it stands here, but would like to, don't hesitate to ask for more context.

Some of the interviewed were quite heavy users of the rhetorical question, while two of them never posed a single one.

#3 Gustav Metzger, Stateless Artist
Macht, die im Privaten sitzt, zu uebernehmen: Wie macht man das?
Taking over power that rests in the private sphere: How do you do it?

#7 Dorothy Iannone, Artist
no rhetorical question
From my old friends, none are really left, but - there are my new friends.

#8 Nikolaus Kuhnert, Arch+ Magazine
Was heisst denn das verfluchte scheissexperiment?
So what is the meaning of this cursed shit-experiment?

#9 Marwan, Artist
Warum male ich meinen Kopf als Landschaft?
Why do I paint my head like a landscape?