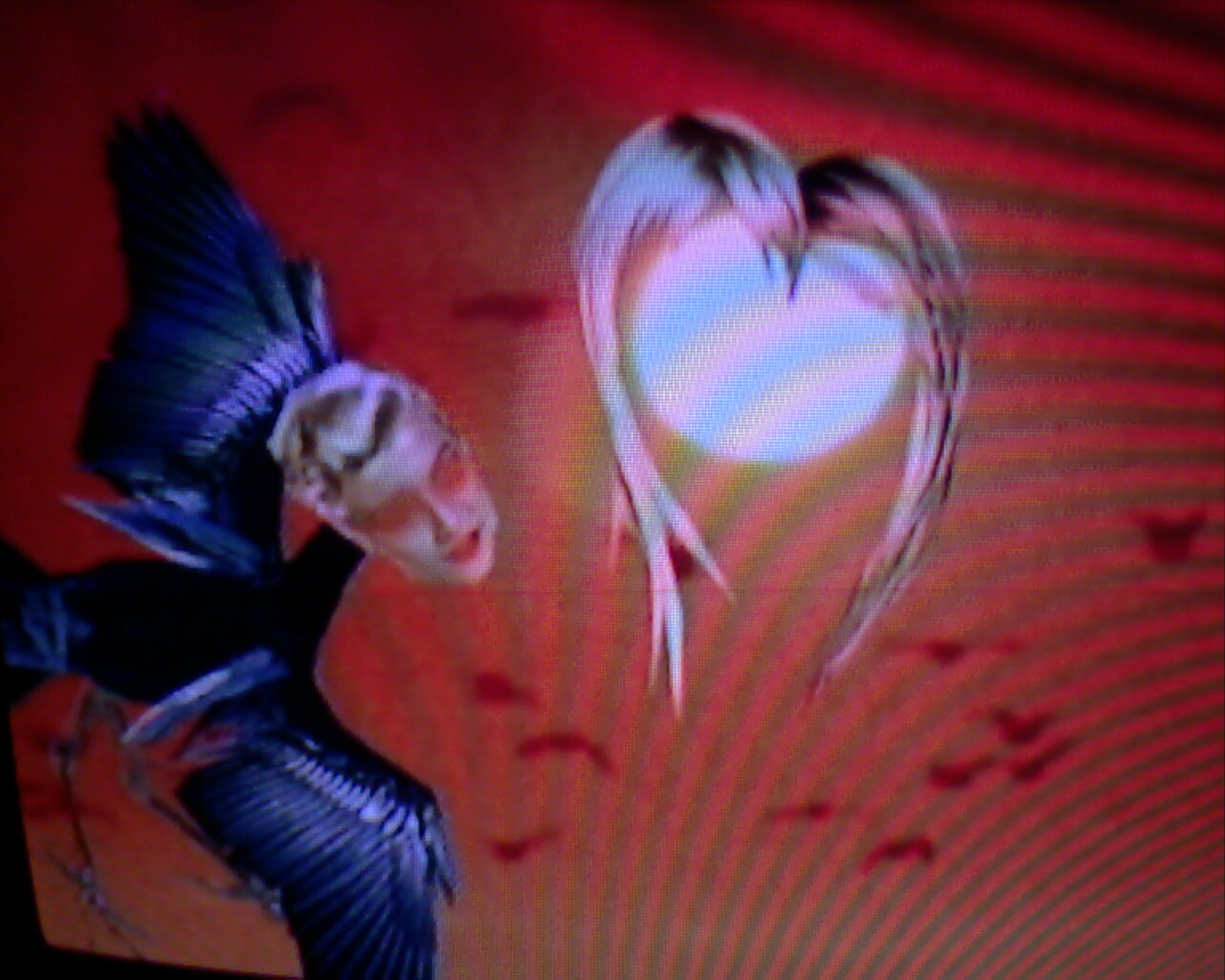 The rising sun glows warm on the red screen. Decorated in cut-and-paste aesthetic with the hair of Nicole Richie and Paris Hilton, it looks a bit like a Valentine’s Day heart. But this paper-thin candy mirage is no match for the harpies who will attack and overwhelm it. Rebecca Kressley’s “A Blonde Sun” plays on a small TV deep in one of the four, Gothic-inspired chambers with long, dark and claustrophobic slits for openings. Conceived by Nikolai Kaindl, the cavernous structures each house one video work. 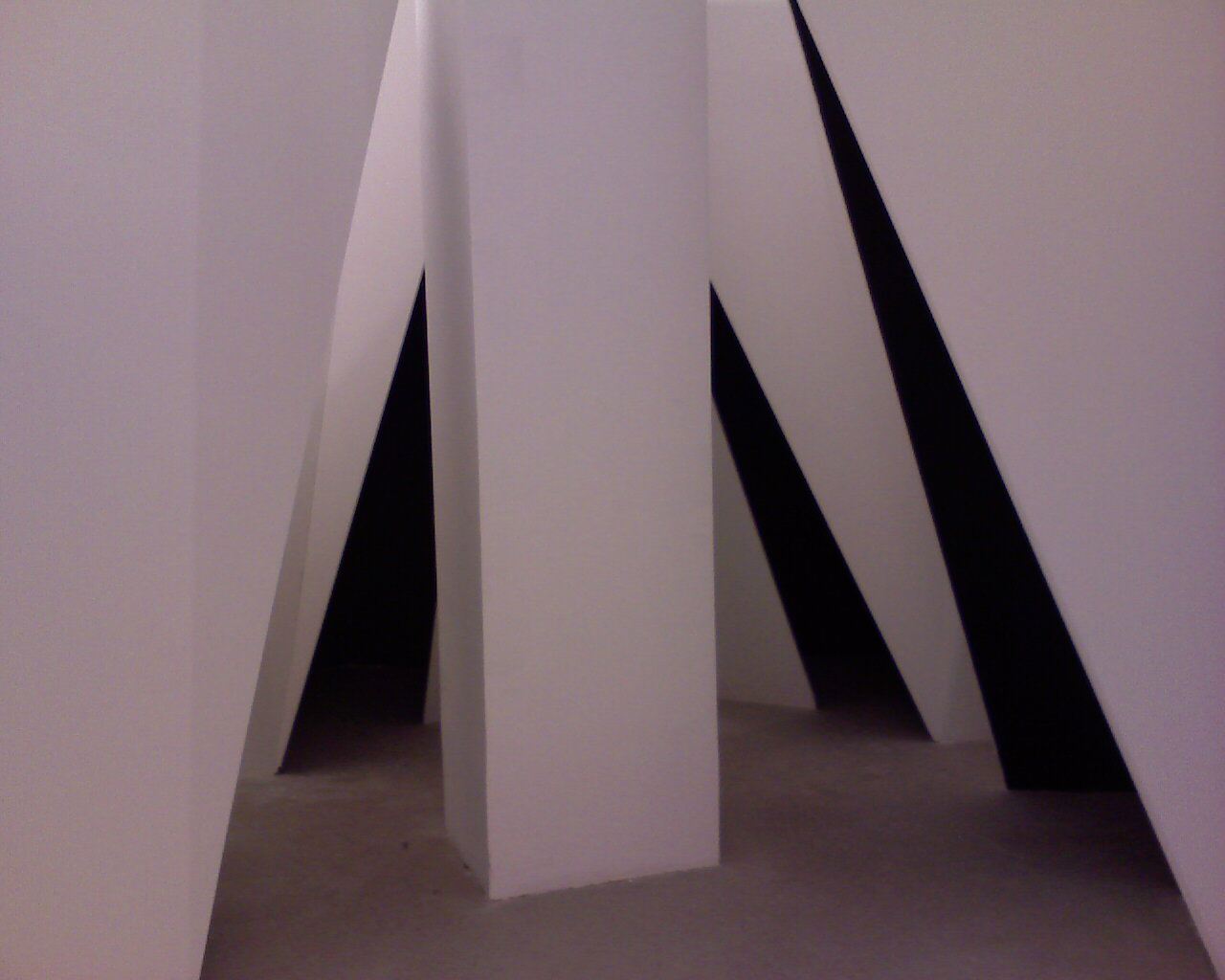 The next chamber shows Elena Kovylina getting completely drunk in a dimly lit courtyard. In this nocturnal performance, she awards herself one military medal and one man in the crowd a dance for each shot of vodka she downs. Strangely parallel to “A Blonde Sun”, Kovylina’s “Waltz” makes a complicating insertion in post-feminist society and the consumption of femininity. Like viruses, the works seek to exploit the weak zones of social structures through association and subsitution. 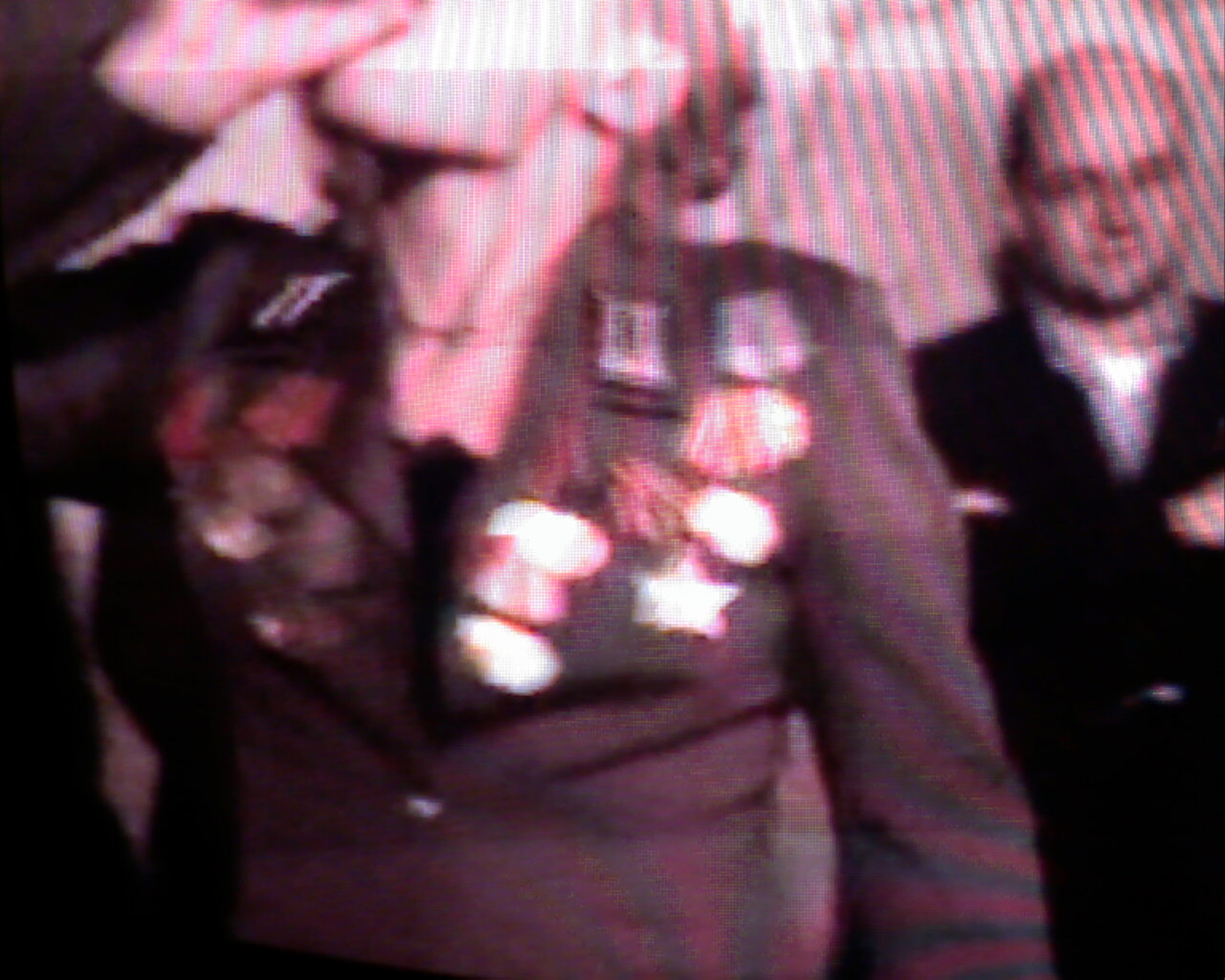 A few lights struggle to reveal the details of the lethargic bodies moving in and out of focus in Elke Marhoefer’s video “Erase You”, filmed in a fog-filled cellar. Here people play with their hair, curl up on the floor, twiddle their thumbs; we see one figure fall from a headstand. In the absence of markers of time governed by commerce and media, they linger in an awkward gap.

Behind the architecture, Karl Holmqvist mixes black and white stills from the film “Interview With a Vampire” with recent tabloid clippings exposing the personal lives of Brad Pitt and Tom Cruise in a poster-sized collage. And, in a small back room, a record player stands waiting for visitors to play its offering: half of Mozart’s “Requiem” and half of Iron Maiden’s “Killers”, pasted together. The walls are decorated with rows of similarly treated sheet music. 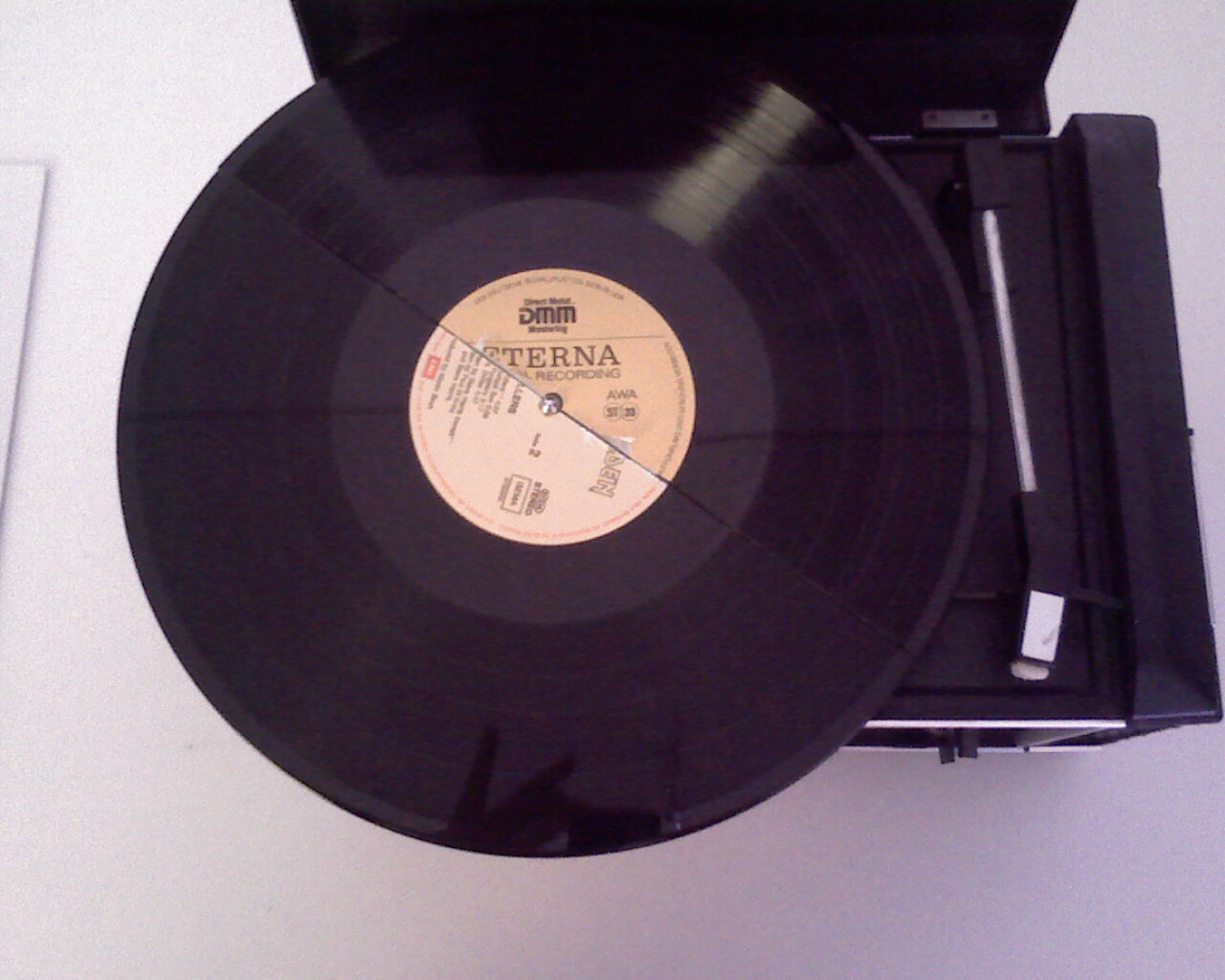 Media icons, superstitions, rituals old and new: UEBERleben is a darkly carnavalesque pastiche of overlayed and decaying anachronisms, functioning together like an ironically raised eyebrow. A refreshing disregard for excessive aesthetic displays of technical finesse and authorial genious courses throughout the show. It is this reduced formal approach which gives the pieces their power.

However easily overlooked and often elaborately disguised, the joints are the weakest part of any structure. But when carefully planned and excecuted they become signs of mastery. In UEBERleben, the essence of the works lies in the elegance and precision of their joints. They function through a series bold and unceremonious cuts, insertions and substitutions. And it is in the spaces of connection where the works eat away at the artifice of commercial pop culture. 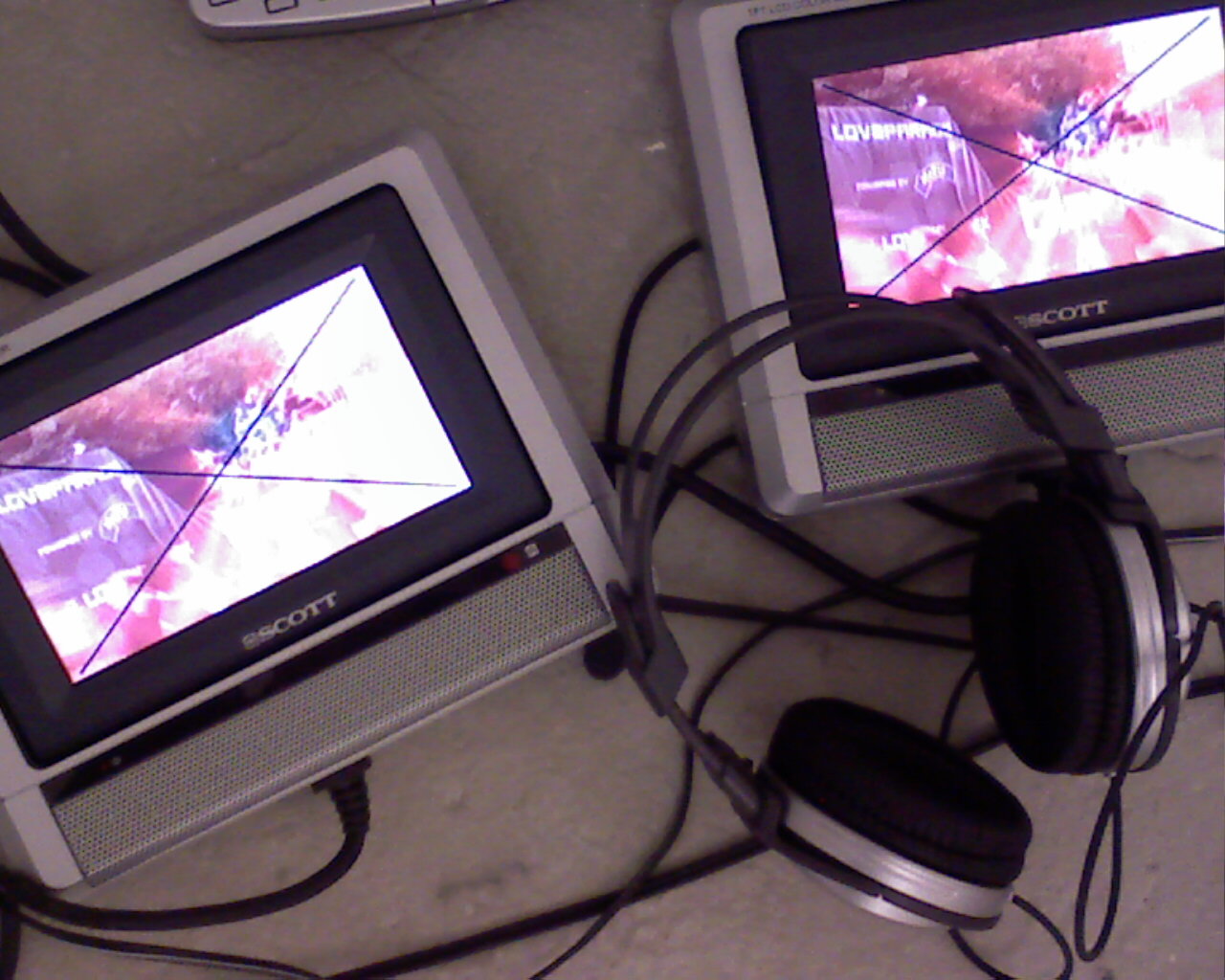 Lounging in a corner - a lazy pile of screens, cables and dvd player, Bernadette Corporation’s 2-channel video “Be Corpse” (a funny pun on their name) turns a steady camera on the flow of partiers at Berlin’s recently resuscitated Love Parade. The sound of the party-parade is replaced by a reading of the group’s script for a never-filmed zombie movie. A simple, uncompromising X is drawn over the entire image, an x which says more than a thousand words.

Imagine Malte Lochstedt in the studio sawing the records “Requiem” and “Killers” in half - and the sheet music too. It’s an almost maniacal picture. Glued together it is not about either piece, but the stark and insanely frequent alternation between the two. Not just the names Iron Maiden, Requiem, Killers, but the elegance of Mozart’s classicism and the blare of Iron Maiden’s metal - which is accelerated, electrified classicism ANYWAY. This is more than just an amusing idea.

Then there is the “art is a hammer” cut made by Rafal Jakubowicz in “Arbeitsdisziplin”. Half of the video consists of a shot of a guard prowling behind a tall chain-link fence. We see him from waist up. He eyes the camera suspiciously. There is an unspoken communication, something like “fuck off”. Cut. A tower looms above the building. It looks like the tower at the entry to Auschwitz in all the Auschwitz movies. And then the VW logo begins to glow on it. Cut to the guard.

“The soldiers had grown silent, not richer - but poorer in communicable experience.”
Walter Benjamin, “The Storyteller”

Soldiers at war cannot very well turn their eyes away from the horrible images which doom them. But what about civilians, could we turn away? Should we? If consumer culture bombards us with horrible images which strip us of our capacity to communicate, how is one to respond? Perhaps it is not just the challenge to rediscover the pleasure of looking, as Rosalind Krauss and TJ Clark would have it. Perhaps it is to find the cut, make the connection, addition or insertion which breaks down the illusory power of media images.